The concept of Qi energy has been an integral component of Eastern philosophy, art and medicine for thousands of years.  However, there is no single accepted definition of Qi. Some people think that Qi is an electric energy, while others believe it is magnetic energy, or heat energy. Scientists have long been interested in measuring Qi but it cannot yet be measured by any medical science or explained via physics. However, there is a lot of science behind Qigong – more so than any other form of Energy Medicine.

The wise one helps others without expecting anything in return.

The wise one does not take credit for doing good for other people.

When a person does not think of one’s accomplishments, one remains fresh in life.

Qi is central to Daoist philosophy – it is the natural force which fills the universe, the universal spirit, the energy behind the continuous movement of molecules and atoms. In Japan it is called ‘ki’, and in India, ‘prana’ or ‘shakti’. The ancient Egyptians referred to it as ‘ka’, and the ancient Greeks as ‘pneuma’. Native Americans call it ‘Great Spirit’ and for Christians, it is the ‘Holy Spirit’. In Hawaii it is known as ‘ha’ or ‘mana’.

The Chinese believe in Three Powers of the universe: Heaven (Tian), Earth (Di) and Human (Ren). Heaven Qi is the most important, consisting of forces such as sunshine, moonlight, gravity and energy from the stars and planets. Earth Qi is controlled by Heaven Qi and according to Chinese theory it is made up of lines and patterns of energy, the earth’s magnetic field and underground heat. Each individual person has their own Qi field which always seeks balance. All natural things, including humans, plants and animals, grow within and are influenced by the natural cycles of Heaven Qi and Earth Qi.

According to Chinese Medicine, within the human body there are two major types of Qi: Congenital Qi (Prenatal or Ancestral Qi) which is the Qi that we are born with; and Acquired Qi (post-natal) which is the Qi that we generate within our lifetime from the air that we breathe, the food that we eat, Qigong practice and being in harmony with the universe. The Qi that flows at the surface of the body, as a protective sheathe, is called Wei Qi or protective Qi.

Each internal organ also has its own Qi. According to Daoist cosmology, the two most fundamental forms of Qi are Yin-Qi and Yang-Qi – the primordial feminine and masculine energies. As well as Heaven Qi and Earth Qi, many Qigong practices utilise the Qi that emanates from trees, flowers, lakes and mountains. If our eating and breathing patterns are healthy, and our qigong practice strong, we can generate a surplus of Acquired Qi, which can then be used to supplement our Congenital Qi. This can aid in many inherited conditions.

We depend on nature for our development and growth – everything in the world comes from the interaction of Heaven Qi (Yang) and Earth Qi (Yin). We breathe to absorb Heaven Qi and eat to absorb Earth Qi. The essence of the food we consume is transported by the Spleen to the Lung to combine with fresh air to produce Zong Qi. Supported by Original Qi stored in the kidneys, Zong Qi is then transformed into True Qi which in its Yin aspect becomes Ying Qi (which flows through the meridians) and in its Yang aspect becomes Wei Qi (which protects us from external pathogens).

In Daoism, Qi has four major actions: ascending, descending, entering and exiting. When Qi is flowing smoothly, and there is balance between its ascending/descending and entering/exiting functions, then we are healthy. Inner Alchemy reveals the human body to be the meeting-place of Heaven and Earth. During Qigong practice we draw Heaven Qi down from above and Earth Qi up from below. Even when we’re not doing qigong practices, we absorb Heaven Qi with every breath we take, and Earth Qi through the food we eat.

This is why there are not specific Qigong exercises for different conditions as Qigong helps balance and harmonise the Qi. When the Qi is in order the Mind, Body and spirit will also be in order.

Simon Blow a near fatal accident at the age of nineteen lead Simon to investigate various methods of healing and rejuvenation a path he has been on for over twenty five years. He is a Sydney-based master teacher (Laoshi) who has been leading regular classes for beginning and continuing students since 1992. Simon has received training and certification from Traditional Chinese Medical Hospitals and Daoist Monasteries in China and Buddhist Monasteries in Australia and has been given authority to share these techniques. Simon has been initiated into Dragon Gate Taoism and given the name of Xin Si, meaning Genuine Wisdom. He is a Standing Council Member of the World Academic Society of Medical Qigong in Beijing. Simon Blow is and author of numerous books, DVDs and audio CDs about this ancient healing art. 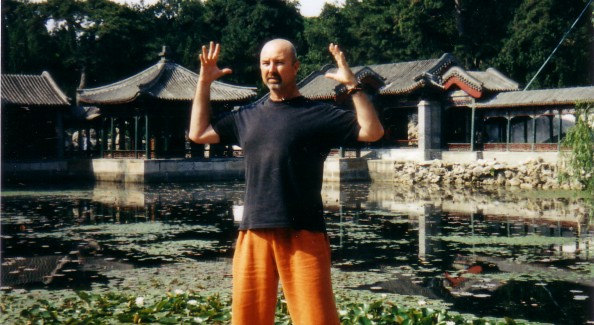